India celebrates all festivals with full enthusiasm and excitement. Similarly, people of Ballia also celebrate all the festivals as per our Indian culture. They take part in all Indian festivals be it Diwali, Teej, Bakri Id or any other with complete enthusiasm and dedication. However, they have two most significant festivals; Dadri Mela and Chhat Pooja. Here we will throw some highlights of Chhat Pooja which will include the importance of the pooja, when it is performed and the way it is performed in Ballia. 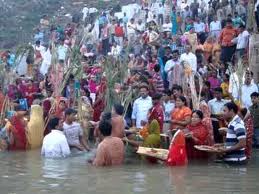 As per Indian Vedas and overall universal law, Sun is considered as the source of energy for all living things. Hence, Sun forms an important part of everyone’s life. The main aim of conducting Chhat pooja is to worship the Sun God. According to Hindu religion it is believed that worship of Sun God keeps you away from various diseases like leprosy and other skin related diseases and all other evils. It also ensures prosperity and longevity of the family. Chhat Pooja is clearly dedicated to Sun god. The word Chhat Pooja arrives from Chhatti Maya also known as ancient Vedic goddess Usha (light).

There are various stories behind the origin of Chhat Pooja. It is believed that Shakya Dwipi Brahmins were experts in worshiping the sun and hence they were invited by King Janak of Nepal for the same. It is at this time that the tradition of Chhat Pooja started for the first time in the world. As per the other versions of the story it is believed that chhat Pooja was started by Drapuadi, wife of Pandavas to solve her immediate problems and to gain the lost kingdom of Pandavas. Another version says that chhat Pooja was started by the son of surya god; Karna. It is also believed that rishis during vedic times use to abstain themselves from food and water for few days in order to take the direct energy from the Sun God.

When is the Chhatt Pooja Performed?

Chhat Pooja is performed on Karitika Shukla Shashthi, the sixth day of the month of Kartika which is generally in the month of October or November.
Traditions
Chhat pooja lasts for four days and includes holy bath, fasting and avoiding water, standing in water for hours and offering prayers to rising and setting sun. Each of the four days of Chhat Pooja has its own significance and each day has a name as per the rituals.

This the first day of Chhat pooja and it starts by having a holy dip in the waters preferably of sacred river Ganga. After the dip, the worshipers take home the holy water and clean the house with the same.  On this day, the devotees observe a fast with having one meal a day. This day is known for basically cleaning yourself and the house from all the impurities.

On this day, a fast of full day is kept by the female worshippers. After the sun set and moon rise, the worshipers break their fast by having a sweet rice delicacy known as Kheer and other delicacies. After having this delicacy the worshipers go for a 36 hours fast without water.

This third day is often known as evening offerings. On this day, lot of delicacies are made to offer to setting sun. In the evening, people in Ballia district mostly go to the bank of river Ganga with the entire family to offer the prashad to setting sun. This day is marked as the significant day and is celebrated as a carnival in Ballia and other places as well. People also sing and dance on the folk songs.

Usha Arghya, the last day of the Chhat pooja is also called as morning offerings. Here the worshipers reach the river bank before the rising sun to offer prayers and prashads to the rising sun. Once the sun rises, the fast by devotees is broken and people visit each other houses for prashad and the fast ends.

Chhat pooja is celebrated with great enthusiasm in Ballia. During this time, the entire atmosphere in Ballia is filled with fun and enthusiasm amongst the people.