The district Ballia is located in the eastern most part of Uttar Pradesh bordering Bihar and other districts of Uttar Pradesh. This place is known for its deep-rooted history as much as it is known for its agricultural and allied activities. It is located 386 kilometers from the state capital Lucknow and about 132 kilometers from Patna, the capital city of Bihar. What makes this region conducive for agricultural activities is its strategic location between the Ganga and Ghagra river basin and the numerous water bodies such as buried channels, meanders, oxbow lakes, etc., which create natural conditions for agricultural activities. 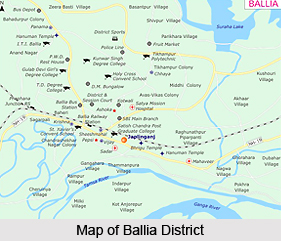 The geographical area of Ballia comprises of a total of 3223 Square Kilometers and a total of 285,361 hectares of land. The district ranks 51st in terms of area in the state of Uttar Pradesh. There is nothing striking about the geology of Ballia district and is marked by inadequate rainfall, and dry weather conditions.

Ballia is bordered by the six districts of Uttar Pradesh and Bihar namely Mau on the west, Ghazipur on the Southwest, Bhojpur on the south, Chapra on the East and Deoria and Siwan on the north. The three main rivers of the district are Ganga, Ghagra and Saryu and the district lies between the parallels of 25033 and 26011 North latitudes and 83038 and 84039 East longitudes.

The Ganges flows along its southern border while the Ghagra flows along the northern border, the confluence of both the rivers that takes place 60-70 km east of Ballia town. The district is marked by a number of other riparian features such as tals, meanders and other natural depressions.

The district is marked by irregular shaped land form due to the confluence of the three rivers and, thus, separating it from Bihar, thereby, also causing a natural boundary between the two states. The soil is very fertile and suitable for agricultural activities in the district. The resultant natural depressions that are caused are of varying depths in which water gets collected before it could drain out to the main streams of the river. The interior upland and lowland tract are the two natural divisions in the district of Ballia.

As per the 2011 Census the population of Ballia is 3,223,642, ranking 108th position in India in terms of population. The density of population of the district is 1081 people per square kilometer. The population has risen by 16.7% as compared to the 2001 Census. The rural areas in the districts have a larger population as compared to the urban areas, signifying the concentration of agricultural activities in the district. The sex ratio of the district is 933 females for every 1000 male population while the literacy rate has been recorded at 73.82% as per the 2011 census. Bhojpuri is the most widely spoken language here, followed by Urdu. This is owing to a a large number of Muslim population within the district. Despite the influence of a number of traditions and languages, it can safely be concluded that Bhojpuri is the predominant language spoken by the people in this district.

The climatic conditions in Ballia is distinguished by mild and dry winters, hot and dry summers and continental rainfall. Ballia receives an average of 1013 mm rainfall, and varies between 850 mm to 1300 mm from year on year basis. With August being the wettest month, April is the driest month of the year. Temparature peaks during May as it can soar up to almost 41 o Celsius pre monsoon, while post monsoon, the temparature settles down anywhere between 20 to 21 0 .

The geographical conditions, more particularly the riparian features of the district, are conducive for a large number of agricultural activities. Hence agriculture is the predominant occupation of the people here. Cereals such as rice, wheat and maize are grown in the arable areas of this region, while sugarcane is grown in the river belt of Ghagra. Other cereals and lentils such as pigeon peas, beans and chickpeas are grown as a rotational crop here in the area.

Facts and Figures about Ballia